How to do AES 256 Encryption & Decryption in Android

First Things First, We should know what exactly the AES256 means

AES, Advanced Encryption Standard is a symmetric block cipher which is chosen by the U.S. government to protect classified information throughout the world to encrypt service data.

You may have heard of advanced encryption standard, or AES for short but may not know the answer to the question “what is AES?” Here are four things you need to know about AES:

What is the best algorithm for encryption?

The Advanced Encryption Standard (AES) is the trusted standard algorithm used by the United States government, as well as other organizations. Although extremely efficient in the 128-bit form, AES also uses 192- and 256-bit keys for very demanding encryption purposes.Dec

All symmetric encryption ciphers use the same key for encryption and decryption. Which means in the sense, both the sender and receiver must have the same key. Each encrypts and decrypts have 128 bits data in chunks by using cryptographic keys 128-, 192- or 256- bits.

Plain text which we use to convert are first converted into Cipher and then outputs into Cipher text bits of 128, 192 & 256. 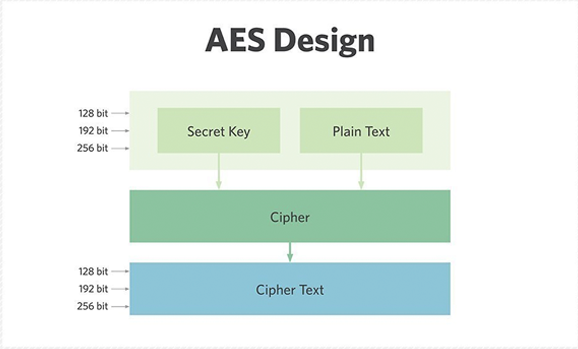 We need to initialize KeyGenerator and SecretKey in order to make our own Key.

Prevent a parameter with getInstance method and initialize the KeyGenerator with keysize 256. Add them in the try catch method to prevent crashes.

Now I’m using IV(Initialization Vector) in my code. This is an optional part in AES Encryption but a way better to use. Use it with SecureRandom class.

Initialize the IV after declaring it globally.

How to call both the methods:

I’ve used an EditText for the user text field to type whatever the string which needs to be encrypted. Two buttons for getting results respectively. One for Encrypting and other for Decrypting. Also used two TextViews for displaying the values(results). One text is used for displaying encrypted value and the other one for decrypted value.

After placing these all you can now see the results of how Encrypt and Decrypt are done through AES 256 Encryption.

Remember that IV(Initialization Vector) is an arbitrary number that is only used along with a secret key for data encryption. To generate the IV we use the SecureRandom class.

From the Initialization vector, We create an IvParameterSpec which is always required when creating the cipher during encryption or decryption.

You can see the output in the below example: